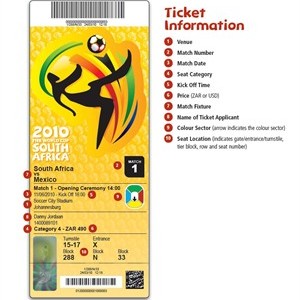 I’ve been told (by an angry reader) to “check my facts” before posting stuff on my blog. The facts in question relate to a posting on this blog entitled “Ticket Chaos – an ICT failure or FIFA greed?” [30th May 2010]. In it I tried to make sense of the fact that the World Cup ticketing system had failed dramatically on 28th May – leading to a lot of bad press and public anger.

As both an academic and a software engineer I’m dedicated to checking my facts … so let me try again on the subject of the World Cup ticketing system.

Here’s a list of some facts I’m certain of:

These are the facts – the rest of the comments in my “Ticket Chaos” posting were speculation (I did make this point in my posting). In short I tried to understand in technical terms why a critical application like the World Cup ticketing system should crash so dramatically on two occasions? Why were the problems that resulted in the crash on 15th April not sorted out properly by 28th May? Were the reasons technical or financial?

I care about this incident for a number of reasons:

Since I’m not an investigative journalist, but simply a software engineer with a blog, I’m not able to provide more facts than these. I do have more information, but I will not post it on my blog since most of it is contradictory. This makes it hard to check my facts.

I’m certain, however, that there is a lot more to this story. Either those who know the facts should share them with those of us who care … or an investigative journalist should set to work to find out more.

2 Replies to “World Cup ticket chaos – in search of facts”