Football and Software Development are both team sports 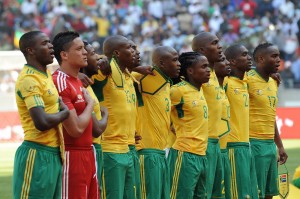 The 2010 World Cup started on June 11th with the mouth-watering prospect of seeing the greatest players on earth doing battle on the football fields of South Africa. Who would be the star of the tournament? Would it be Wayne Rooney, Lionel Messi or Cristiano Ronaldo? As we enter the last week of the tournament all of these stars and many more have returned home, having failed to make much of an impression.

One of the problems with modern football, and how it is marketed, is that the focus is on the star players – the heroes. This is wrong because football is a team sport. Each one of the 11 players has a role to play and the team will only succeed if all players work together on the dual objectives of scoring goals and defending their own goal posts.  At Manchester United Wayne Rooney is an inventive and exciting player. Wearing his England jersey Rooney at the 2010 World Cup was anything but exciting. The same can be said for most of the other football super-stars.

At club level the players work together every day for months and years in training and in matches learning to play as a team. Within the team each player is able to shine in a particular role, but the team provides the environment allowing each player to succeed. At the international level there is very little time for players to work together at becoming teams. It is therefore not surprising that individual skill and excellence doesn’t count for much at the World Cup.

There is a similar lesson to learn in the field of software development. Developing software is, like football, a team sport. Individual developers need to play specific roles in support of the project and its goals. There is – or should be – no room for heroes.

I’ve recently been thinking a lot about teams, both in the context of football and of software development. In terms of software I’ve been involved in coordinating a Team Software Process (TSP) pilot programme in South Africa. TSP is a teaming methodology developed at the Software Engineering Institute (SEI) in the USA. A TSP team focuses on defining and achieving goals together. There is a focus on individual performance, but as inputs to the team’s objectives. TSP teams also work – like a football team – with a skilled and professional coach. While the team works to deliver the project, the TSP coach works to develop the team.

There is a lot of commonality between a game of football and a software development project. I believe that football and software engineering can learn from each other. I wonder if FIFA or some of the national teams have thought about running TSP training for their players and coaches?

If Bafana Bafana are still looking for a new coach I would like to suggest myself! I know very little about football, but I know a lot about teams!

2 Replies to “Football and Software Development are both team sports”