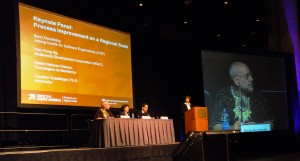 The Software Engineering Institute (SEI) at Carnegie Mellon University holds an annual conference in the USA. This year the conference, called “SEPG North America”, was held from March 22-25 in Savannah, Georgia. When I attended my first SEPG 5 years ago there were close to 2,000 delegates. This year there were just under 1,000 – a clear sign of the really tough economic times!!

The South African ICT sector featured prominently at this year’s SEPG since I was asked to participate in the plenary session the opened the Conference. I was part of a panel of 3 speakers each talking about regional process improvement initiatives in our own country. The other panellists were Rafael Salazar from Mexico and Wan Peng Ng from Malaysia.

I spoke about the “Bringing CMMI to South Africa” programme being run at the JCSE with support from the Department of Trade and Industry (the dti ). I also described the Team Software Process (TSP) Pilot programme that the JCSE and the SEI at Nedbank and Dariel Solutions. As part of my presentation I showed a 5 minute version of a new dti video that promotes the SA ICT sector.

The panel session ended with a Q&A session during which Rafael, Wan Peng and I answered questions on the ICT sectors in each of our countries.

I had really positive feedback both to my talk and to the video. Lots of delegates said that they liked my contribution very much; that they were “amazed” to hear about the IT industry in South Africa. Many said that they thought the video “is stunning”.

Anyone that wants to hear more about SEPG, CMMI, the TSP Pilot or wants to see the dti  video should contact me.