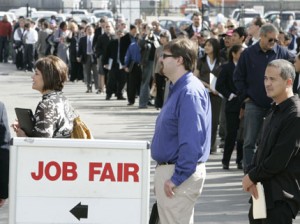 JOBS!  No … not merely jobs … DECENT JOBS. This is the topic on everyone’s lips as we rush headlong into 2011. Last Monday (31st January) South Africa’s Communication Workers’ Union (CWU) entered the fray and gave the jobs debate an ICT angle.

Speaking at the CWU’s national congress the union’s deputy president, Karthi Pillay, suggested that “advancement of technology in the ICT sector has cost thousands of jobs over the past few years.” He cited Telkom as an example where new telecomms technology was partly to blame for a reduction in the workforce from 69,000 to 23,000.

While it is true that the rapid evolution in ICT technology does indeed lead to the loss of “old” jobs, they are invariably replaced with “new” jobs. Karthi Pillay is clearly aware of this … in his speech he insisted that “those who have been retrenched have to be retrained and opportunities  …  created for them.”

The national theme for 2011 as the “year of job creation” was set early in January when President Zuma delivered the ANC’s annual policy statement.  He promised to create 5 million jobs over the next 10 years.  This undertaking led to a debate in the press and elsewhere around the difference between “jobs” and “decent jobs”.  The concept of a “decent job” has, in fact, been defined by the International Labour Organisation (ILO).  According to the ILO

I believe that in the 21st Century the ICT sector provides the finest examples of “Decent Work”. I also believe that ICT has the potential to create large numbers of “Decent Jobs” – notwithstanding the CWU’s fear that advances in technology leads to the loss of jobs.

I’m particularly passionate about one important sub-sector of ICT, namely software development. Creating thousands of software development jobs in South Africa and other parts of Africa over the next few years would certainly make a meaningful contribution to the ILO’s Decent Work Agenda. It would also represent a significant element of President Zuma’s job creation promise.

As I settle down to work in 2011 the issue of job creation is on top of my “to-do” list. Late last year I developed an – admittedly ambitious – strategy to create 1,000 new software development jobs over the next three years. I’m now getting ready to implement it.

Watch this blog for updates as the plans unfold and contribute by submitting your comments.