Where is the REAL Wakanda? 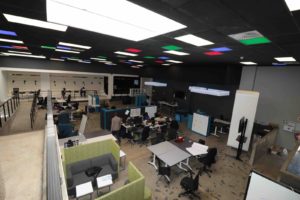 My once-popular blog, “The Software Engineer”, has been dormant and neglected since 2013. I’ve decided that the time is now right to bring it back to life. I’ve given it a new tag-line: “Passionate About Digital Africa”, and a fresh look-and-feel.

Although my blog has been hibernating, I myself have been EXTREMELY busy over the past 5 years, working hard in Braamfontein, building the Tshimologong Precinct. I’m confident that Braamfontein and inner-city Johannesburg will soon be Africa’s answer to Silicon Valley. In this – my first post since September 26, 2013 – I briefly describe this exciting 5-year adventure.

The recent block-buster movie, Black Panther, tells the story of a mythical African enclave called Wakanda. The Wakandans are an extremely advanced high-tech community that must decide whether to use its innovative talent to dominate the rest of the world, or to share its technology for the good of humanity. One of the reasons for the movie’s huge success (it ranks in the top 10 of the highest-grossing films of all time) is its positive portrayal of Africa and Africans. Many people around the world seem to want to see our continent and its people succeed in the 21st Century. I share this dream for Africa.

Long before Hollywood gave us “Wakanda”, I started to build a (far less glitzy) version of it in Braamfontein, Johannesburg. I haven’t been alone in this. Digital innovation “hubs” have been popping up in Nairobi, Cape Town, Lagos and Accra.

We’re now 5 years into the journey. I started with 5 empty derelict buildings in Juta Street, 2 blocks South of Wits University’s main campus. While Wits owns the buildings and gave me use of them, I had to raise all the funds necessary to renovate them. I managed to raise over R50m for this purpose. By mid-2017 the renovations were complete. We now have a beautiful facility called the “Tshimologong Digital Innovation Precinct”. I also managed to bring together a number of strategic partners, all of whom buy into the vision I’ve developed. These partners include Microsoft, IBM Research, Cisco, Telkom, BCX, ACSA and MMI. Government participation has come via the City of Johannesburg, Gauteng Province and the Technology Innovation Agency (TIA).

Bringing together the partnerships and the buildings we now have a powerful ecosystem focused on promoting the growth of digital skills, innovation and entrepreneurship. A management team has been assembled under a dynamic CEO (Lesley Donna Williams) and Tshimologong is now “open for business”.

My own role is to continue to grow the ecosystem and to provide thought leadership with respect to digital innovation. I genuinely believe that a realistic version of “Wakanda” is emerging in Africa. Unlike the fictional version, it is not a single place, hidden from view. It is distributed across a number of nodes spread across Africa. Hopefully these nodes – one of which is Tshimologong – will work together to ensure that Africa plays a significant role in driving the 4th Industrial Revolution.

If you want to hear more about my vision, you may want to watch a TEDx talk I did in 2014. It is titled “My Dream of an Africa Brain Hub”. In many ways this dream has now become a reality.